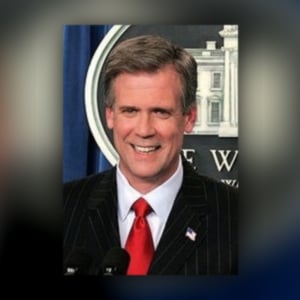 Some people ask me, usually vehement liberal Americans, how I could count amongst my few real friends, an arch-Republican spokesman for the Bush administration.

Well, Tony and I disagreed on most things political and came to robust verbal blows on the subject of climate change but that’s the charm of friendship. Life would indeed be a bore if all of your buddies agreed with everything you said and tap-danced to the same tired riff.

I like to think that Tony was a professional journalist and political commentator first and White House spokesman second. He could, I rather think, have filled the post of Press Secretary for an Obama or McCain administration with equal aplomb, dignity and bonhommie.

“An old-fashioned gentleman” is how my wife described him. Once, after Shona’s harassment by long-distance phone to his office in the White House, I asked Tony, “Did you ever get to meet Margaret Thatcher? “No, he replied. “Well, you just did,” I offered, to his great amusement.

With a family history of associated genetic risk, the long battle with colon cancer finally proved too much for even the ever-optimistic, ambitious T. Snow. His last email to me, less than three months before his death spoke of a planned family summer vacation in Italy, book deal, lecture tours and meeting up in August at our concert where I really wanted to get Tony up on stage at Wolftrap to have a flutey moment together, if only for one last time. Sadly, that will not now happen. But the memories of a good American, loyal to citizen and nation, will remain a treasure.

Tony badgered me for a couple of years to get a colonoscopy after my brother’s death from liver failure following his own colon cancer. I finally did just that and, although I never discussed the results with Tony, I am glad that I took his stern advice, not to put too fine a point on it. Good, solid advice to all middle-aged gents, especially where such cancer has been the unfortunately bountiful fruit of the family tree. Think on it, brothers. I shall renew my acquaintance with the one-eyed camera-snake later this year to check out that wondrous organ once again and will be thinking of the Snowman as I drift off into the land of nod, invitational buttocks gently parted. And, on waking, I will be all the better prepared for the outcome, whether good or not-so-good, having known and learned a little of life from Robert Anthony Snow.