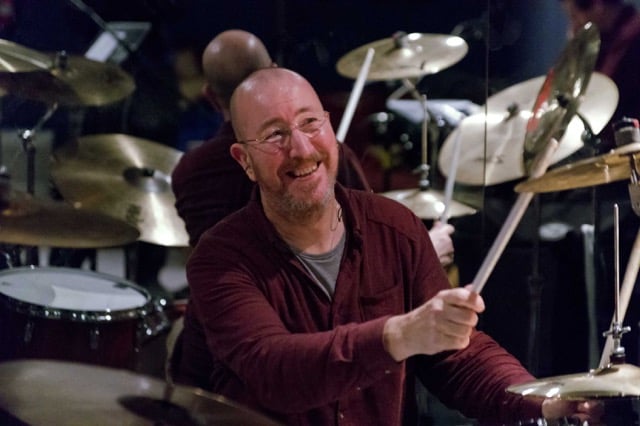 Scott was born in Romford, Essex in 1956. He started playing drums at the age of fifteen after a school friend claimed to have played drums in a Black Sabbath covers band during the holidays, a claim which Scott took with a large pinch of salt. The ‘why’ is lost in time but for some reason Scott decided to drag his father’s old drum kit out of the attic and have a go himself.

Since those early days Scott has played with many bands and solo musicians.

He was signed to Gary Numan’s Scratch record label in the seventies with power pop band ‘The Moonwalkers’, played the Reading Festival in ’82 with blues rock band ‘Against The Grain’, toured with top blues guitarist Larry Miller and in ’91 answered an ad in Melody Maker which led to his involvement with Jethro Tull and the Catfish Rising album. He recorded two tracks, ‘Still loving you tonight’ and ‘Truck stop runner’, the latter ending up on the ‘Nightcap’ album.

Scott is also an author. His writing career was kick-started after he won first prize in the Sunday Express short story competition in 1996. His fantasy novel for children, ‘The Ley Lines of Lushbury’, was long-listed for the Times/Chicken House Children’s novel competition in 2010 and his thriller, ‘The Trespass’, is a Kindle bestseller. His musical memoirs (including the Tull period) are covered in his autobiographical musings, ‘Rattle and Drum’ (available on Amazon if you fancy a little light reading: http://www.amazon.co.uk/Rattle-Drum-life-edge-rock-ebook/dp/B008TZ9A4K ).

Drumming, however, will always be his first love and he can still be seen flailing at the kit with ace Genesis Tribute band (Gabriel-Era) ‘The Book of Genesis’, http://www.thebookofgenesis.co.uk and occasionally with Italian prog legends, ‘Analogy’, http://www.analogy.it/Menu.html

Scott lives in Berkshire with his wife, Katherine, his two youngest children and his long-suffering neighbours.