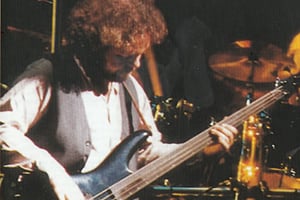 Maartin Allcock is a multi-instrumentalist known mostly as a fretless bass player and guitarist born in Manchester in 1957. After studying music at Huddersfield and Leeds he played on his first tour with Mike Harding in 1977. He moved to Brittany for a while, where he learned to cook. He then trained as a chef and worked in the Shetland Islands.

In 1981 he returned to music with The Bully Wee Band, a celtic folk group. After this broke up he toured in UK, Ireland and Europe with Kieran Halpin until he was invited to join the re-forming Fairport Convention as lead guitarist in 1985, touring extensively in UK, USA, Europe, Australia, Turkey, Hong Kong & Bermuda.

Also in 1988 he was asked to join Jethro Tull on keys which he stayed with for four years, touring in North & South America, Western & Eastern Europe, Turkey and Estonia.

In October 1999 Maart recorded his second solo album, OX15, with guest appearances from Ian Anderson of Jethro Tull, Indian girl singer Najma Akhtar and other past and present members of both Jethro Tull and Fairport Convention.

In 2000 Maart moved to Snowdonia and studied Welsh at Coleg Harlech.

In 2002, Maart toured with Blue Tapestry, Kieran Halpin, Orchard (featuring Dave Swarbrick, Beryl Marriott and Kevin Dempsey) as well as performing with Gilly Darbey and touring the UK, Germany, Switzerland and the Netherlands with The (new) John Wright Band.

In 2003 there were eleven albums, 2 TV series and tours of Holland, Germany and Italy. Plus the Dave Swarbrick Fiddlecase Tunebook and the recording of the third solo album, Serving Suggestion.

In 2004 there was a Danish tour with John Wright, the Kieran Halpin Songbook Two, the Fairport Convention Songbook One v2.0, an album with Mairi Armstrong, a couple of Blue Tapestry gigs, Ralph McTell’s 60th birthday concert and a

UK tour with Beth Nielsen Chapman. Also the setting up of Squiggle Records (see the boss below).

In 2007 there was some recording with Ralph McTell for the Steve Tilston boxset, two UK tours with Beth Nielsen Chapman, more recording and production work and ongoing dates with Swarb’s Lazarus.

In 2008 there was recording with Ian McCalman, gigs with Gwenan Gibbard, Netherlands and Belgium dates with Swarb’s Lazarus, recording with the late John Wright, a TV appearance with Heather Jones, and a lot of notation work, including work for Sain Recordiau and the start of the Dave Swarbrick Fiddle Tunes book. A lot of production work for Sain Recordiau too, including the debut album from young Welsh traditional band Calan and the second album for Gwenan Gibbard. There were a couple of visits to Rome and Barcelona for Jethro Tull Fan club conventions.
The Bad Shepherds was formed along with Ade Edmondson and Troy Donockley. After a few false starts including a week’s rehearsal in St Lucia, the lineup finally came together with fiddler Andy Dinan and a lot of work started to come in for the band. In October Maart took part in Yr Arbrawf Mawr – The Big Experiment, a three day course in traditional music at Coleg Harlech. Another UK tour with Beth Nielsen Chapman followed in November and the year finished on the run up to Xmas with dates with The Bad Shepherds, who also started recording their album.

2009 started with a new album with Kieran Halpin, and a Burns Night supper in Stockholm for RBS with Mairi Armstrong. Most of the year was taken up with The Bad Shepherds, but Maart left at the end of the summer to concentrate on various other projects, including more production work for Sain Recordiau and transcription work for both Richard Thompson and Dave Swarbrick. In May Maart was the subject of a half hour documentary on the BBC Radio Wales Arts Show, and he now has a monthly column in Acoustic magazine. In October, he was once again a guest of Rome-based Tull tribute act OAK.

In 1988 he was asked to join Jethro Tull on keys which he stayed with for four years, touring in North & South America, Western & Eastern Europe, Turkey and Estonia.