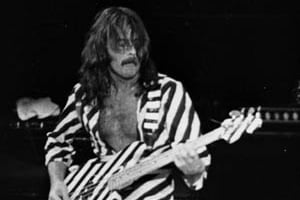 Hammond adopted the name “Hammond-Hammond” as a joke, since both his father’s name and mother’s maiden name were the same. He also joked in interviews that his mother defiantly chose to keep her maiden name, just like Eleanor Roosevelt.

One of several band members from Blackpool, England, he met band leader Ian Anderson in school when he was 17 years old, eventually joining a band with Anderson and future Jethro Tull members John Evan and Barriemore Barlow.

After leaving Grammar School, he opted to study painting rather than continue with music, but he was convinced to join Jethro Tull in January 1971. During the time of Tull’s dramatic stage costumes, Jeffrey started wearing a black and white striped suit and played a matching bass guitar, and this became his trademark and a feature of Tull’s Thick as a Brick stage performance. Hammond burned the suit in December 1975 on his departure from the band.

Hammond played on the following albums:

He then left the band to continue his career in art. According to Ian Anderson’s sleevenotes for the 2002 reissue of Tull’s Minstrel in the Gallery, Hammond “returned to his first love, painting, and put down his bass guitar, never to play again.”

Before joining the band as a performer, Hammond appears to have spent much time with them in the background. Ian Anderson wrote songs about his friend’s idiosyncrasies, of which the best known are “A Song for Jeffrey” (This Wasoff ), “Jeffrey Goes to Leicester Square” (Stand Up) and “For Michael Collins, Jeffrey and Me” (Benefit). Introducing the first song, in the days before Hammond joined the band, Anderson would portray him in slightly condescending terms as someone with emotional problems who lost his way easily, as described in the first line of the song.

Hammond narrated the surreal piece “The Story of the Hare Who Lost His Spectacles” on the album A Passion Play, and the related short film. He also received credit, along with Anderson and John Evans for writing the piece.

Hammond was also credited with suggesting the name for the “claghorn”, a hybrid instrument. Anderson took the mouthpiece and bell from a toy saxophone and attached them to the body of a flute. The result can be heard on the track “Dharma for One” on the album This Was.

Hammond attended Jethro Tull’s 25th anniversary reunion party in 1994. He participated in an interview, along with Ian Anderson and Martin Barre, that was featured as a bonus track on the 1997 reissue of Thick as a Brick.

Jeffrey has made a few brief surprise appearances on stage with Ian And Jethro Tull over the years although not as a performing musician. He currently lives and paints in Blackpool, Lancashire.