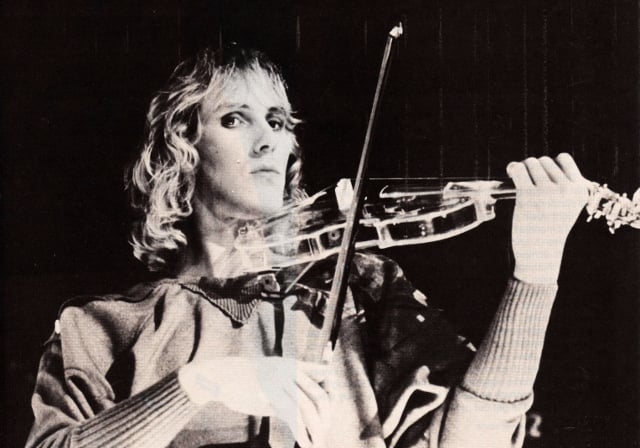 He began playing the piano at age 7 and violin at age 8. Later he attended Bede Hall Grammar School, leaving at age 16. At that point he joined the band Fat Grapple, playing locally in venues such as Redcar Jazz Club. It was at this venue that they played in support of Curved Air, which Jobson joined the following year.

At this time Jobson fronted Fat Grapple on electric violin, opening with a rendition of the current hit piece “Jig-a-Jig”. The band played original compositions and were well regarded, but failed to break out beyond the Newcastle area. Nonetheless, Jobson’s playing won him a place in Curved Air, though the group disbanded after just one album, 1973’s Air Cut, which brought Jobson little commercial success beyond what he’d had with Fat Grapple.

In 1973 he replaced Brian Eno in Roxy Music, getting the job partially through a connection between his sister and the sister of singer Bryan Ferry, who knew each other in college. Jobson found himself playing three roles: Eno’s, Ferry’s (who had stepped up as a frontman after first playing piano), and his own. Jobson stayed with the band for three studio albums and many tours.

In 1976, with Roxy on a hiatus, Jobson recorded an obscure solo single, “Yesterday Boulevard” b/w On a Still Night”, playing all instruments himself with the exception of drums (by Simon Phillips). To date (2013) neither side of the single have ever been reissued on vinyl or CD. During his time with Roxy, Jobson also provided studio overdubs on King Crimson’s live “USA” album and on several solo albums by members of Roxy, The Who, and Deep Purple. After turning down an offer to join Procol Harum, Jobson became a member of Frank Zappa’s band in mid-1976. He appeared on the cover of the Zoot Allures album though he didn’t play a note on it. He did however perform on the Zappa in New York live double album.

After UK broke up in early 1980, Jobson started work on a solo project, but was then asked to participate in Jethro Tull frontman Ian Anderson’s solo album, which became the Tull album A, on which Jobson was credited as a ‘special guest’. He stayed on for the subsequent world tour, playing his final live show in France in February 1981.

Jobson was briefly a member of Yes in 1983 after the departure of Tony Kaye. Jobson never recorded nor performed live with Yes. His only official appearance with Yes was on the video for “Owner of a Lonely Heart”. But the video was released after Kaye had rejoined and Jobson left. This resulted in Jobson appearing (though edited out as much as possible) in the original version of the song’s video. Jobson has reported on his own website that he was first asked to replace Kaye and then (as relations were mended between Yes and Kaye) to share the keyboard duties. Jobson declined, and left the band.

In the 1980s, Jobson released two albums. Zinc – The Green Album (1983) was performed in a rock-band format with session musicians, and Theme of Secrets (1985) was an electronic album and one of the first releases from New Age record label Private Music. That same year Jobson wrote and performed three pieces on Piano One, also from Private Music. Throughout the 1980s and 1990s he also built a successful career as a composer of TV and film soundtracks. He scored nearly 100 episodes of the TV series Nash Bridges. He also produced the Bulgarian Women Choir’s 2000 album Voices of Life, contributing three new compositions (from an abortive UK reunion project called Legacy) and playing violin on two of the new pieces. Since 2000, he has run his own label, “Globe Music Media Arts,” adding a second label, Glo Digital, in 2009. The official Eddie Jobson Forum went online on January 1, 2006.

The Creation of Peace Festival in Kazan, Tatarstan on August 30, 2008 saw Jobson’s return to the stage after more than 27 years. He played violin on one song with the Patti Smith Group, one song with Fairport Convention, and two songs (“Red” and second part of “Larks’ Tongues in Aspic”) with the King Crimson Project. This band featured Adrian Belew, Tony Levin, Pat Mastelotto, Eric Slick and Julie Slick; it was created specifically for this festival, and one additional performance, a few days later on September 3, 2008 at the B1 club in Moscow. In addition to joining this collection of musicians, Jobson also performed piano and violin solos at the B1.

In October 2007, Jobson announced the formation of a new band, UKZ, with Trey Gunn, Marco Minnemann, Alex Machacek, and Aaron Lippert. Their EP, “Radiation,” became available from the Globe Music online store in January 2009 and had its official release on Glo Digital in March 2009; a 7:48 video of the title track was released earlier, appearing on YouTube in January 2009. The band’s first live performance was held at Town Hall in New York City on January 24, 2009. UKZ also performed four dates in Japan in June 2009 in the cities of Tokyo, Nagoya, and Osaka. In the summer of 2009, Jobson created an adjunct performing group, the ‘U-Z Project,’ which has featured a revolving line-up of guest musicians on a number of mini-tours through August 2009 in the eastern U.S., as well as Poland and Russia in November 2009.Three performances in Poland (in the cities of Krakow, Warsaw, and Bydgoszcz) saw Jobson reunited with former Roxy Music and UK bandmate, John Wetton, for what was termed “The 30th Anniversary of UK.” Additionally, on 9 August 2009, Eddie Jobson did a one-off reunion gig with Curved Air in Chislehurst, Kent.

In January 2010 Jobson was named to the technical advisory board of Austin, Texas based keyboard manufacturer, Infinite Response. He was involved in the development of the company’s VAX77 folding MIDI keyboard controller, which Jobson showcased at the January 2010 NAMM Show in Anaheim, California. Jobson’s U-Z Project headlined NEARfest in Bethlehem, Pennsylvania on June 20, 2010. A CD compiled from various U-Z performances in 2009 was released in Japan in November 2010.

In January 2011, Jobson gave a series of “master classes” in Japan, featuring performances of compositions throughout his career and lecture-style discussions of his music. In April of that year, a Jobson-Wetton “UK” reunion tour provided performances in Japan and the US, with Alex Machacek (guitar) and Marco Minnemann (drums) completing the 4-piece lineup. Jobson headlined the 2011 Zappanale festival on August 21 in Bad Doberan, Germany, and played an earlier gig in Zoetermeer, Netherlands on August 19, with a U-Z project lineup of Marc Bonilla (vocals/bass), Alex Machacek (guitar) and Marco Minnemann (drums).

In early 2012, Jobson confirmed that he re-formed the U.K. trio lineup—Jobson, John Wetton, and Terry Bozzio — for a one-off world tour, which took place from May–June 2012, with the trio playing dates in North America and Japan and Alex Machacek (guitar) and Gary Husband (drums) substituting for Bozzio in the band lineup during the European dates and a final added show in which the band played at NEARFest Apocalypse in Bethlehem, Pennsylvania as the Sunday headliner.

After UK broke up in early 1980, Jobson started work on a solo project, but was then asked to participate in Jethro Tull frontman Ian Anderson’s solo album, which became the Tull album A, on which Jobson was credited as a ‘special guest’. He stayed on for the subsequent world tour, playing his final live show in France in February 1981.