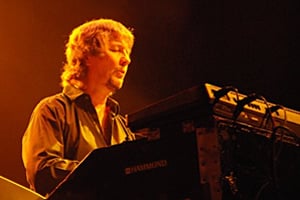 Born in Sunderland, N.E. England, Don’s musical talents were forged with an alloy of classical training, a lively interest in his local rock and jazz scene, and regular paid gigs playing Hammond organ for the “turns” at numerous Working Men’s Clubs in the locale.

He continued his musical education at Nottingham Uni. and the RMCM, and turned pro in 1971 taking his own band round the world, playing on cruise liners, to residencies in Africa, Florida, and the Far-East.

Returning to London, in 1974 he entered the world of rock via Cozy Powell’s band Hammer which had three hit singles, and a year of touring.

On a break in 1980 Don played on Ozzy Osbourne’s new album, “Blizzard of Oz”. At the conclusion of the Rainbow tour, Don flew to LA and climbed aboard the Ozzy crazy train staying for another three year stint, that saw the albums “Bark at the Moon”, and “Speak of the Devil” emerge.

Don returned to touring in 1987 joining Jethro Tull for their European and US jaunts.

Securing a solo deal with MCA, he quit Tull in January ’88 to compose “K2”, which was recorded in the summer with Gary Moore, Cozy Powell, Chris Thompson and Colin Blunstone.

In 1997 he coaxed Colin Blunstone out of retirement and onto a sell-out club and theatre tour. Even more unlikely he flew to Dublin in April where he arranged and conducted “Love Shine a Light” for Katrina & the Waves, to win the Eurovision Song Contest for Britain!

1999 will see the re-release of “K2” on 121 (re-mastered and re-packaged) plus a tour starting in May with his own band playing music from the album, plus a selection of past hits celebrating 25 years in the biz.

Don joined the venerable Deep Purple following the departure of Jon Lord and continues to perform with them to this day in concert around the world.

Don lives with his family in Cambridgeshire, where he has his own pre-production and soundtrack facility, complete with a large selection of vintage keyboard and recording gear, the accent being on Hammond and Mug!