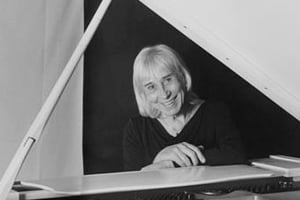 ALL ABOUT DAVID ‘DEE’

David Palmer, known to all as “DP”, was born the longest time ago in an age when the right and proper thing for a young lad to do was to join the army. This, David did: not with idea of necessarily shooting anyone (although the thought has subsequently occurred while touring in Venezuela), but with the opportunistic intention of free lessons to learn to play clarinet whilst sitting atop a large and shiny horse in the Royal Horseguards cavalry regiment to which he was sent. There he studied at Kneller Hall, the Royal Military School of Music.

David went on to the Royal Academy of Music majoring in composition where he won the Eric Coates Prize in his graduation year.

Going about his early career as a jobbing arranger and conductor of recording sessions, he recorded a first album project, “Nicola”, in 1967 with the legendary Bert Jansch, Scottish hero of the then Folk scene. was referred to Terry Ellis, the then manager of the early Jethro Tull, who were making their first album at Sound Techniques Studio in Chelsea, London, courtesy of Terry’s father’s £800 loan.

At extremely short notice, David came up with arrangements for the horns and strings on the Mick Abraham’s composition, “Move on Alone” from the “This Was” album. This speed of work and professional performance endeared him at once to the band and he was soon to visit the boys again in the studio with the brilliant string quartet arrangement to “A Christmas Song”.

He continued to provide the many interesting detailed orchestral instrument contributions to the Tull recordings over the next few years; most notably on the Aqualung album and Warchild, by which time, his relationship to the others had become almost that of a sixth member. Indeed, when the live touring female string quartet had one tizzy and one G&T too many, at the end of 1975, David stepped in to fill the void as second keyboard player, concentrating on the provision of the orchestral substitutes then becoming possible with the development of electronic music synthesizers.

Usually clad in decorative and gentlemanly attire, and smoking a “Sherlock Holmes” style pipe, David was a perfect complement to the eccentricities of the Hammond-Hammond, Barlow, Evans, Barre and Anderson school of theatrical rock music.

David finally parted company with Tull on a regular basis at least, in 1980, along with Evans and Barlow, forming first, a new group with John, called Tallis.

This was not to be a commercial success however, and David returned to the world of film scoring, advertising and various sessions, as well as improving his brick-laying skills in the renovation of a small estate in Surrey, England which he had purchased. Well, not England or even all of Surrey — just the small estate, but he is rumoured to be working on the rest.

He worked briefly again with Ian Anderson on the German TV performance of material from Ian’s first solo record “Walk Into Light” and was soon to be called to the Tull world again, this time by Ariola Records who gave David the job of making an orchestral album of Tull music, “A Classic Case”. Featuring guest appearances from Ian and Martin, this record went on to become a cult classic and provided the basis for a series of album releases and subsequent orchestral concert tours featuring the music of Yes, Genesis, Pink Floyd and others.

He went on to work in Paris with the experimental electronic realisation of Mozart’s piano sonatas, and was appointed a Fellow of the Royal Academy Of Music in 1994, an honour shared with Elton John and Annie Lennox, who had also studied there.

Shortly after, he orchestrated the Beatles classic album, “Sgt. Pepper”, for EMI at the famous Abbey Road studios with the Royal Academy Of Music Symphony Orchestra, donating the lion’s share of the royalties for the benefit of impecunious music students at the Royal Academy, having once been one himself.

Recently, David completed the Orchestral Queen tribute, “Passing Open Windows” with the Royal Philharmonic and, more recently still, recorded an album, Norske Popklassikerf with the London Symphony Orchestra, performing the rock and pop classics of contemporary Norwegian composers which earned him a gold album for sales in the Norwegian charts.

Needless to say this work was roundly set upon by the Norwegian Press who vowed that David would never live to be tolerated in person in the land of the rising Fjord.

However, David Palmer later returned from an invitation to conduct the Bergen (Norway) Philharmonic Orchestra in their Christmas Special series of concert celebrations. He was rumoured to be alive, well and quietly victorious.

He has said of the press in general (in an attempt to endear himself, as always, to lesser mortals), “Would someone please explain to them the difference between A-440 and an elephant’s fart?” ‘Way to go, David.

The Bert Jansch album, Nicola, is still available and talks with Bert of a follow-up thirty two years later, have begun.

After a long part of his life as a husband and father, David underwent gender change surgery after the death of his wife, Margaret and was “reborn” as Dee Palmer to continue writing and orchestrating from his home in Hove, near Brighton, England.

See D.P. soon in a theatre or club near you, and offer to buy her a drink. On no account speak to her in a Norwegian accent.

After a long part of his life as a husband and father, David underwent gender change surgery after the death of his wife, Margaret and was “reborn” as Dee Palmer to continue writing and orchestrating from his home in Hove, near Brighton, England.