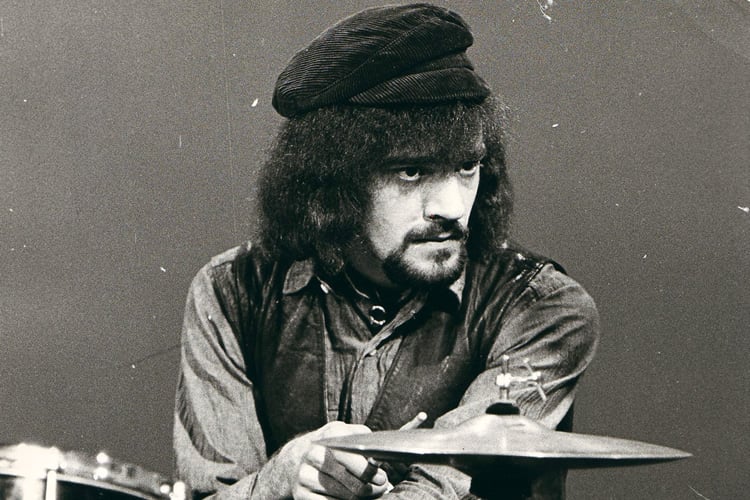 Clive was born on the 12th of December, 1946. He took up the drums as a serious occupation with his friend and compatriot, Mick Abrahams in the group “McGregor’s Engine in 1967. Based in Luton, England, the band played in the general locality with Clive mustering an extraordinary non-matching drum kit, comprised of bits and pieces of various manufacturers’ equipment. It was as a drummer of “mix and match” description that he joined the fledgling Jethro Tull at the end of ’67 to accompany Ian Anderson, Mick and Glenn Cornick in the early, heady days of the post blues-boom years of Brit-rock.

Never the self-professed technical drummer, Clive made his impact, based on his throbbing, gritty engagement with the essence of blues and rock and roll, moved by the work of Ginger Baker, Mitch Mitchell et al.

Later, Clive was to become firm friends of Corky Laing of “Mountain” and the many other drummers from the bands with which the early Tull found themselves appearing on the first US tours in 1969 and 1970.

After the album “Aqualung”, Clive felt that Tull was entering a more complex musical phase, not so much in keeping with his own more earthy roots, and volunteered to take early retirement to the different world of marriage, dog kennel management and a venture in light engineering which had been his earlier profession. Tull continued with the employment of Barrie Barlow, an old chum of Ian’s and John’s from schooldays in Blackpool.

In 1974, Clive joined the band “Blodwyn Pig” which Mick Abrahams had formed on his departure from Tull in 1969.

Today, Clive still remains a sought-after session musician, with many, many credits to his name amongst the world of old and not-so-old music groups.

After leaving Tull a few hundred years ago, I played for a while with Robin Trower, Frankie Miller and Jim Dewar in band called “Jude”, signed to the Chrysalis label.

At the same time, I was starting some other activities in areas outside music. I had become a married man, and didn’t really expect to stay in music as a full-time job. I moved to a farm outside Luton and started a business in dog boarding kennels and also invested in a engineering firm in the area, together with a few other things, just in case!

I was still asked to do the odd musical thing and, in no particular order, they included, over the next few years: working with Gordon Giltrap, Steve Hillage, Uli Roth, Manfred Mann and, of course, dealing with the ever-present invitations from Mick Abrahams to become involved with one project or another.

Since sadly splitting up with my wife, I have been working on a newly released solo album for the ” New Day” record label and taking it easy while the offers come pouring in!

Today, Clive still remains a sought-after session musician, with many, many credits to his name amongst the world of old and not-so-old music groups.