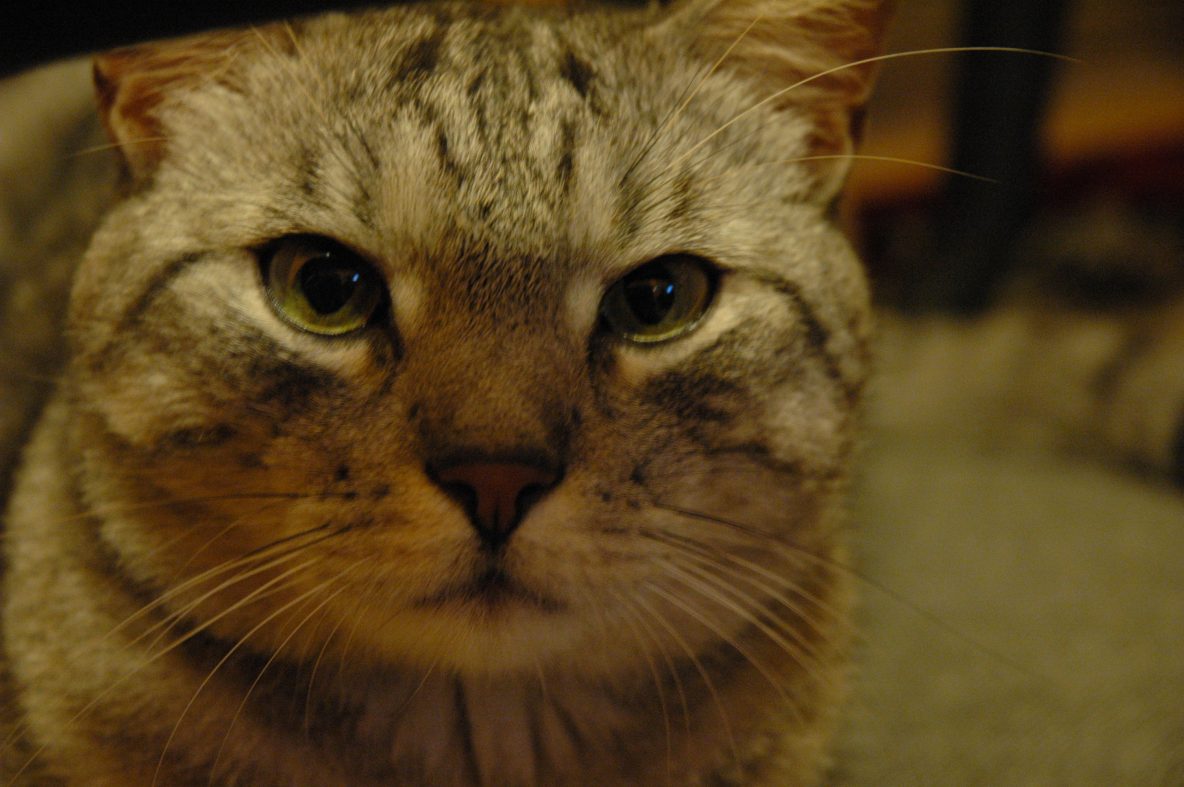 Ian Anderson wittering on about cats

OH YES! THEY ARE THE PUSSIES-CAT. 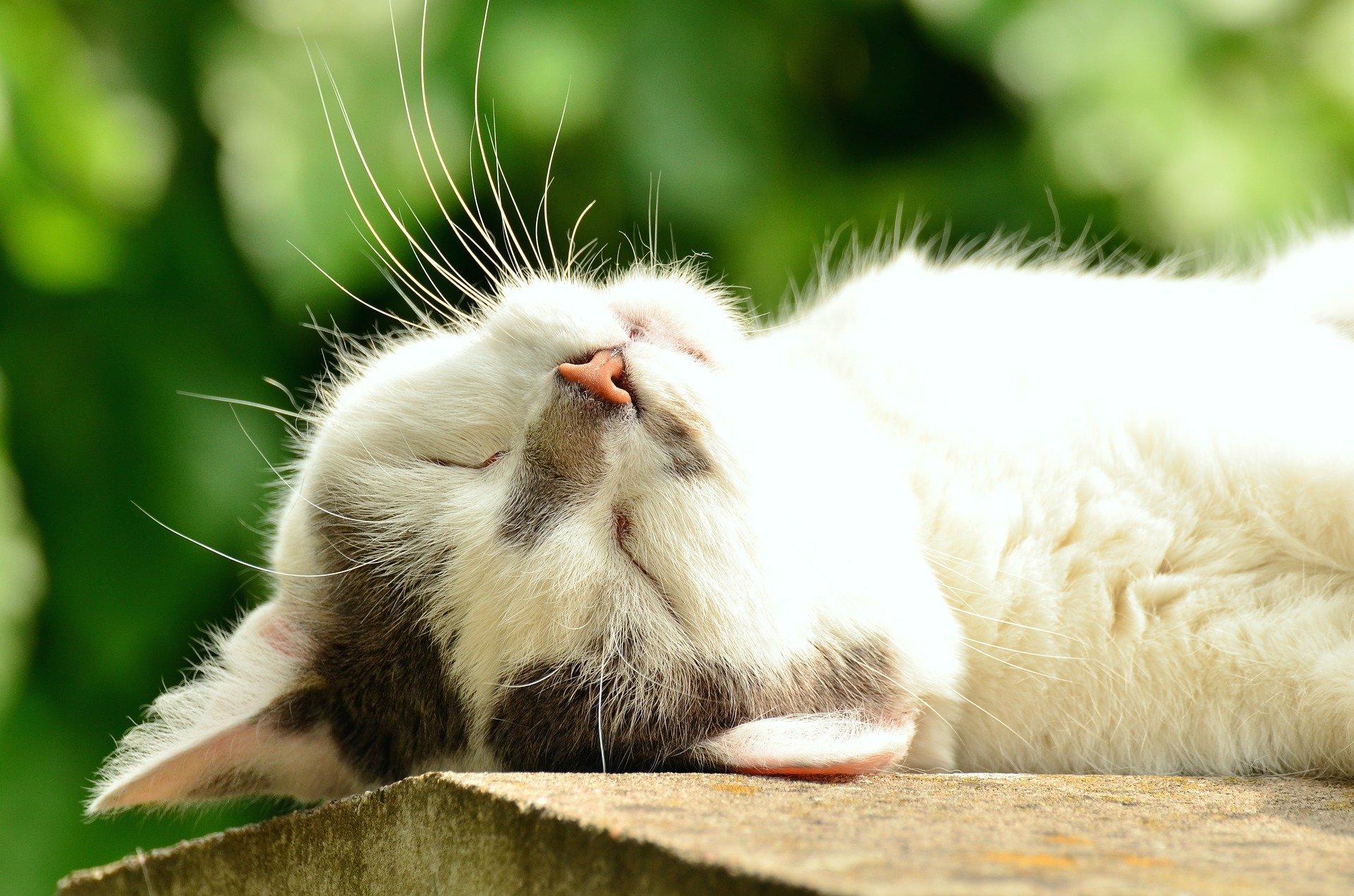 We inherited a rather undesirable grey, moth-eaten old tomcat with an ear missing. We named him Smudge. This unattractive but still noble creature used us a feeding stop and occasional shelter while about his dubious business. He did not once bring home a lady friend, let alone the product of his ungirded, unguarded even, loins.

I remember, as a five or six year old, throwing the protesting animal on to an (unlit) fire which scared the proverbial out of him and attaching a rubber ball with a length of elastic to his poor tail which caused much hilarity in me, but not in the strangely trusting old Smudge. The awful guilt and sadness to follow meant that these dreadfulnesses of brat-child excess were never to repeat in my subsequent relationships with that most independent but people- loving companion, Felis felis, Felis domesticus, Felis vulgaris, or Felis pussycatimus, depending on your level of schoolboy Latin and taxonomic species recognition.

My wife Shona had, when we first met, a black and rather disapproving flat mate called Fur. He was to become a rather reluctant but pragmatic and permanent house guest in due course when we married and enjoyed his final years in the seclusion of the English countryside, far from his perch above the Diwan-I-Am Indian restaurant in George Street, London. His second floor apartment (which he had shared with the pre-marital Shona) offered the opportunity to test Newtonian Gravitational Theory when he plummeted to a spell of mild concussion from a slippery window sill.

A series of country cats was to follow through the seventies, eighties and nineties: a Burmese called Cuillin (bossy, bad tempered and utterly selfish), and a series of mostly black feral farm cats beginning with Kirin and ending with Squeek – two of the most noble of some twenty-something little guys rescued from the grain store and carefully nurtured through post-suckling, human-bonding weeks before finding homes amongst the local community and friends. Mum was eventually trapped successfully and spayed but was absolutely untameable, being multi-generational feral and hateful of humankind. Indeed, the trauma of capture and spaying caused her (we guess) to leave the farm buildings and she was not seen again.

In the nineties, we moved home and purchased our first Bengal cat. The Bengal is an attractively spotted domestic breed which began in the seventies as a hybrid of the wild Asian Leopard Cat (Felis bengalensis) and the domestic cat as an experiment into resistance to Feline Leukaemia. The Bengal, with its varying, but usually tiny degree of wild genetic input is still somewhat controversial amongst the zoo and feline conservation community.

Currently, the breed is sold by reputable breeders as an animal four or more generations removed from the original hybrid (which is known as a F1). The F4 cross (or more likely, an F8 or greater) will prove to be a fine pet and companion, with only positive traits left from the wild origins. The Bengal is playful, loves water, delights in walks with its human guardians and, while displaying some special loyalty to an individual with whom it bonds, will still happily relate to all the family including dogs and other cats.

But to the purists, this “fooling around with nature” is undesirable and potentially weakens the discrete gene pool of Felis bengalensis, the wild Asian Leopard Cat. Well, that might be the case but for two realities: there are no non-captive ALC’s in California or the home counties of England for the potential dilution of the species. And on the human-settled fringes of the native habitat of many of the small wild cats of the world, there have been, most believe, opportunistic matings between species of wild cat and domestic cats for probably several thousand years.

Although the males from such hybridisation are typically sterile for the first three, or so, generations, the female off-spring can reproduce as mates of domestic and wild males alike.

The ancestor of the modern domestic cat is probably Felis lybicus, the African Wild Cat and his northern companion Felis sylvestris, the European Wild Cat, may also be to blame for the subsequent creation of one of those two friendly animal species who have favoured us humans with their loving presence as working companions around and in the home. O.K: I know some of you prefer the dopey old dog. Each to his own. Even I have two Belgian Shepherd working guard dogs. (I call them guard dogs because I have to guard them from the cats.)

Some work has been done by adventurous private breeders with the hybridisation of the American Bob-cat (Felis lynx), the Asian Jungle Cat (Felis chaus) and the African Serval (Felis serval), but these attempts to produce exotic pets may go a step too far for most of us. The validation of the establishment of the Bengal breed must be that it might raise the consciousness of the public as to plight of the endangered species of small wild cats, particularly, the little spotty guys.

Most of the countries of the world have one or more species of small wild cat. By small, I mean big enough to give you a fright but probably not mean enough to bite your leg off.

So, we are talking something less than size of the Puma (Mountain Lion, Cougar, Felis concolor) and on down to the tiny Oncilla (Felis tigrina) weighing a mere 4 – 6 pounds. Smallest of all is the delightful Rusty Spotted Cat (Felis rubiginosa) which, at just over two pounds, is less than half the size of a typical domestic cat.

There are, arguably, around 26 species of small wild cat on planet CNN and many of them are endangered with a few species being so to the point of near-extinction.

These little guys are in need of first, recognition on a larger scale and second, some funding to provide research and last-resort breeding facilities, both in captive circumstances and in the wild through acquisition and management of conservation reserves.

One of my favourite mystery cats is the Andean Mountain Cat (Felis jacobita) who lives in the high Andes above the 12,000 foot mark. Never caught or kept in captivity, this hardy and adaptable animal is probably threatened on many fronts: human predation for fur, totem or imagined damage to poultry and small livestock. Loss or fragmentation of habitat leads to less-than-sustainable population mass in any one area.

The Margay, the Ocelot, Geoffroy’s Cat, Pallas’ Cat, the Marbled Cat, the Fishing Cat, the Flat-headed Cat, the Rusty-spotted Cat, the Iriomote Cat, the Bornean Bay Cat, the Jaguarundi, and the Kodkod are some of the threatened species of small wild cat which need our help. The first three have been mercilessly depleted for their fur – being trapped in their hundreds of thousands in South America – and it is hoped that international pressure will bring this ridiculous trade to an end in our lifetimes, if not in the lifetimes of the little guys themselves.

Because the small cats are nocturnal, shy and secretive, they do not make good commercial sense as Zoo exhibits in the ever-tightening economy of the modern zoo. Most zoos have now abandoned breeding programmes for the small cats and the future of some of the species is in the hands of independent privately funded captive breeders, most of whom are scientifically sound and with great dedication and experience. Some website links are displayed elsewhere on this site.

I hope that the information here is of some stimulation to any of you who have ever cuddled a new pet kitten or simply admired one of nature’s minor miracles. The little guy who shares your home is a tiny step away, genetically speaking, from the wide array of the 36 species of wild cat, big and small.

They all, to a man, are the pussies cat.